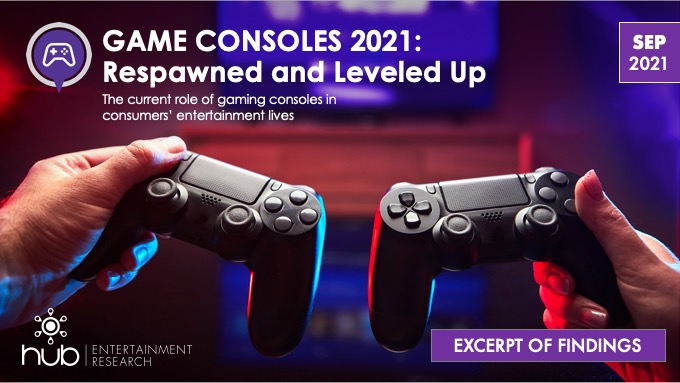 Nintendo’s NES was first sold in the USA in 1986; Sony’s PlayStation in 1995; Microsoft’s Xbox in 2001. Almost every American adult born after 1975 can look back to at least part of their childhood – and all their adulthood – and recall the importance that videogame consoles played in their own lives, their friends’, and their generation’s.

Far from a child’s hobby, the games available on today’s videogame consoles appeal to a wide cross section of consumers. Time spent on gaming continues to occupy an increasing amount of “media time,” especially among younger consumers. And during the pandemic, gaming transcended a past-time to become the cultural meeting place for consumers unable to see each other in person.   The results are clear:  in 2020, global gaming revenue surged to exceed that of movies and North American sports, combined[1].

Game consoles in particular are poised to change more than just the consumption of games: they aspire to be the hub through which consumers find, choose, and consume content of all kinds.  This research will measure how much disposable time gaming consumes, and what other activities and content that share is coming from.  We’ll also look at the extent to which consoles influence or control other entertainment, like streaming video, music, or communicating with friends. And we’ll also look at gaming as an emerging and innovative competitor for advertising dollars.

This study will reveal both the threats and opportunities gaming represents for media companies in 2021, as well as provide context by showing how key metrics have shifted since Hub’s Gaming 360 report in 2019.