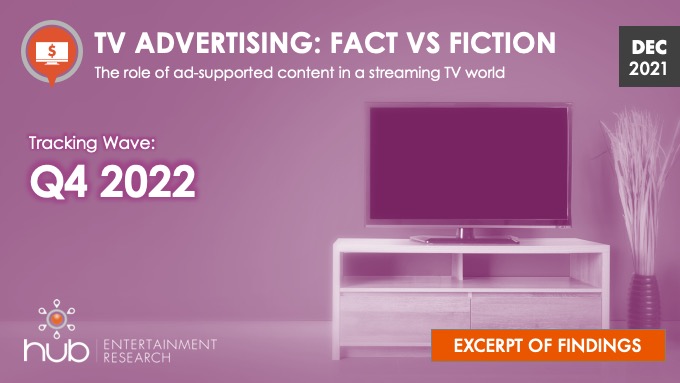 In the first wave of our TV Advertising: Fact vs. Fiction study, we learned that consumer perceptions and behaviors related to ads in TV content are not nearly as black-and-white as conventional wisdom would have one believe. Among other things, we found that the vast majority of TV viewers do NOT profess to be “ad-intolerant” (i.e., will avoid ads at all costs), and we found that even those who claim to detest ads still watch ad-supported platforms—in some cases more frequently than “ad acceptors” do.

As with everything else related to the business of television, the role of ad-supported TV continues to evolve, even since the first wave of the study earlier this year. Streaming platforms like HBO Max now offer ad-supported tiers, use of free ad-supported services continues to grow, and FASTs like The Roku Channel have begun offering their own original content. In addition to updating the baseline measures of ad tolerance, engagement, and satisfaction we captured back in June, this new wave will explore the impact of all of these new developments.

In the end, the goal of the study is to help TV service and content providers offer an ad experience that will maximize viewer satisfaction, engagement, and loyalty.