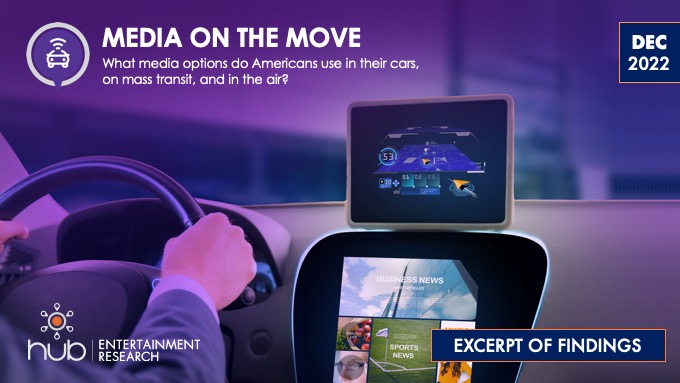 While the focus on new media technology is often about what’s in the living room or kitchen – streaming to TVs, smart speakers, and so on – there is another revolution happening in the garage. Cars, SUVs, and trucks have seen a revolution in their media tech as well. Old tech like broadcast radio and CDs have often been replaced by the music and audio apps found on consumers’ smartphones, which are now plugged into the car’s media systems. Kids who used to watch DVDs on in-car systems now often are using tablets with downloaded content, or even in-car hotspots.

Similar transitions are seen in other aspects of consumer travel, such as commuting, where digital options are supplanting analog media like newspapers and magazines – or providing new options for video and audio on-the-go.

This new report will explore how people use media while “on the move’ – with a particular emphasis on in-car usage, but also including other mobile use such as while commuting or traveling.

The report will look at the high-tech media world inside Americans’ cars, trucks and SUVs, including the presence and use of new media tech such as Apple CarPlay or Android Auto, voice commands, in-car Wi-Fi hotspots, and seatback screens as well as traditional built-in audio systems. It will also cover topics such as media sources people are more likely to consume in the car; what drivers want in entertainment versus passengers; and how kids drive in-car media choices. Additionally, we’ll look briefly at other out-of-home mobile use, such as while commuting (bus/train/subway) or traveling (train/airplane).

This report will provide guidance to media stakeholders better understand consumers’ use of media on the move to help guide business tactics and strategic investments.