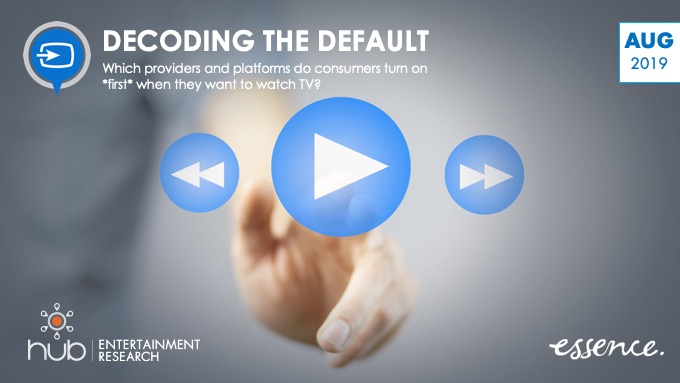 Decoding the Default is Hub’s annual study on the platforms and devices consumers turn to first when they’re ready to watch TV content—and how their TV “home base” has changed over time.

According to our 2019 Best Bundle study, the average TV consumer now accesses shows and movies from more than four different sources.And as the number of sources increases, so does the proportion of viewers who say they simply have too many TV sources to manage—up 10 points from just a year ago. What’s more, nearly 4 in 10 say that if a new TV service were to come along that appealed to them, they’d drop an existing service before signing up.

All of which begs two questions:

Our research has shown that among other things, consumers are most likely to remain loyal to the service they consider their TV “default”, the service that serves as their home base for viewing.

Decoding the Default study tracks the sources that are most and least likely to be viewers’ first stop for TV, explores which sources are on the increase as the default and which are on the decline, and which factors and considerations are the strongest drivers of consumers’ default choice.

Online survey with 1,678 U.S. consumers age 16-74 who have broadband access at home and watch a minimum of 1 hour of TV per week.