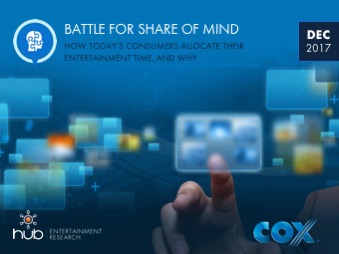 Consumers’ entertainment decisions were markedly less complicated when the only “platform” vying for consumers’ attention was the TV set-top box. Today, with the rapid rise of new entertainment sources, and with the vast majority of consumers having multiple platforms and screens at their disposal, entertainment time has become extraordinarily fragmented.

The issue is not just one of access method. Yes, viewers now have more ways of watching traditional, long-form TV and movie content. But new platforms have also led to the development of brand new forms of entertainment that were unheard of just a decade ago, including an ever-expanding list of short-form video genres, content from multiple social media sources, and livestreaming.

The catch? This explosion of options has not come with any expansion in available time. As a result, consumers have, by necessity, become more judicious in their entertainment decisions.

We’ve long believed that it’s not enough to simply know what platforms consumers are using in general. More important is knowing which platforms they’re most loyal to—the platforms that will be the last to go if and when consumers decide to scale back.

Our Decoding the Default study explored platform loyalty by identifying those consumers consider their TV “home base”. The Battle for Share of Mind looks at loyalty from an additional perspective: how consumers distribute their time across all entertainment options, which they spend the most, and most consistent, time with, and the factors that drive their decisions to choose some options over others.

What we learned: Which platforms are most entrenched with consumers, which are most at risk, and what any platform needs to do meet consumers’ “short list” requirements.

Online survey with 1,774 U.S. consumers age 16-74 who have broadband access at home and watch a minimum of 5 hours of TV per week.