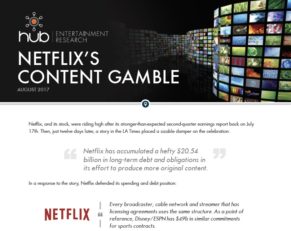 Netflix, and its stock, were riding high after its stronger-than-expected second-quarter earnings report back on July 17th. Then, just twelve days later, a story in the LA Times placed a sizable damper on the celebration:

“Netflix has accumulated a hefty $20.54 billion in long-term debt and obligations in its effort to produce more original content.”

In a response to the story, Netflix defended its spending and debt position:

“Every broadcaster, cable network and streamer that has licensing agreements uses the same structure. As a point of reference, Disney/ESPN has $49b in similar commitments for sports contracts.”