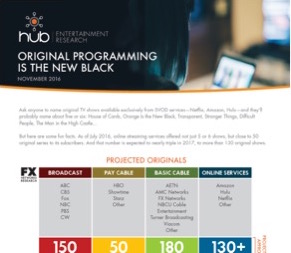 ORIGINAL PROGRAMMING IS THE NEW BLACK

But here are some fun facts. As of July 2016, online streaming services offered not just 5 or 6 shows, but close to 50 original series to its subscribers. And that number is expected to nearly triple in 2017, to more than 130 original shows.